An Introduction to nb Sola Gratia.

NB Sola Gratia hit the inland waterways of the UK on Friday 7 March 2014. At that point, she was technically still called Dawn, but we renamed her when we licensed her. She is an ex Black Prince hire boat, with one other owner in between. She is 58' long and 6'10" wide, with a large cruiser stern deck (back or blunt end), and extended bow deck (front or pointy end).

Although she was fairly comfortable for the short term in her original hireboat format, we had the interior refitted during June and July to make her more suitable for our needs as Continuously Cruising Liveaboards.

The name of NB "SOLA GRATIA" is from the Latin. The meaning varies very slightly depending on the context, but is either 'Only by Grace' or 'By Grace Alone'.

For several years we had felt God's calling to the waterways, but we could not see how this could happen. Then a series of events changed all that and we felt God moving powerfully to put things in place.

We recognised that we had done nothing to deserve anything that we had, or what God was giving to us now. We were constantly reminded that it is only by God's grace that we are saved. There is nothing we can do to earn His favour.

We are still learning exactly what He wants us to do, but we are humbled, blessed and very happy to be here. However, we believe that God has given us "The Good Ship", along with a ministry to use her. We believe that at least part of this ministry is to provide a haven for people to whom we are led: People who, for whatever reason, need to rest in the tranquillity of the waterways. You are more than welcome to come and visit us.

God called us to join Canal Ministries in February 2015, and we are honoured and privileged to be working with other couples who have a similar vision for sharing God's love on the Inland Waterways of Britain.

In July 2015, Tim's father passed away following a fall. As a result, we remained in the Newbury area so that we could regularly pop back to Bournemouth to look after his Mum. We remained on the boat, and began to regularly attend Bridge Church. However, during January, his Mum decided that she was struggling to look after herself. We have therefore moved down to Bournemouth, and hope to get back to the boat from time to time.

Our eldest daughter got married in August. This was followed by our youngest daughter announcing she was going to make us grandparents. This was not without its complications, but thankfully all has turned out well, and we have a delightful grand-daughter who is giving the entire family lots of pleasure.

In August 2016, we received the shock news that Tracey's mum had passed away unexpectedly. She died peacefully in her sleep. Exactly two months later, Tim's mum died following a short illness. After dealing with all the formalities (although some are still ongoing), we are finally now getting back to our life on the waterways.

We have now made our spiritual home in Oldbury, in the Black Country. We have joined Bethel, an Elim Church. We have even signed up with a Health Centre and a Dentist! 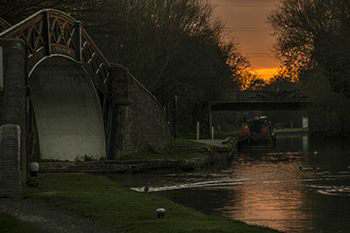 Tim is a keen photographer and takes many photographs around the canal network. We are in the process of setting up a website just for this. In the meantime, please take a look at his Facebook Page:

As of March 2019, Oakley has retired and gone to live with his Doggy Daddy (Dixon) and owners. We therefore had a new member of the crew in Guide Dog Teddy, who also had his own website and blog. Unfortunately, as sometimes happens, Teddy was not cut out to be a Guide Dog and sadly has had to be withdrawn. The good news is that he has been rehomed with some friends of ours, so he will enjoy a wonderful life and we will still be able to see him occasionally. 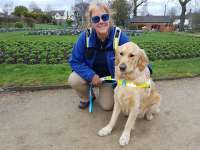 Tracey will be talking at Bethel Church, Stone Street, Oldbury, West Midlands on 10 September from 7.00pm. 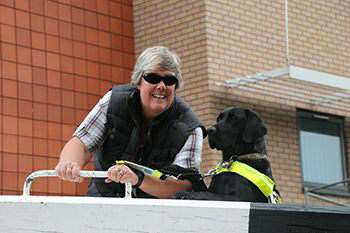 The First Mate, Tracey, started a sponsored walk to raise funds for Guide Dogs on 4 July 2015, along the towpath of the Kennet & Avon Canal between Bath and Reading.

Unfortunately, following the death of Tim's father, Raymond, on 20 July, the walk was suspended at Kintbury. However, we were delighted to reach our original target at the same time, and so were able to name a Guide Dog Puppy "Raymond" in his memory.

So far, as well as "Raymond", we have named another puppy "Chrissie" (in memory of Tracey's mother who died suddenly in August 2016) and have raised another £5,000 to name a puppy "Margaret" in memory of Tim's mum who passed away in October 2016.

Watch the video below for more information.

The video below is one of the seminars that Tracey gave at the Crick Boat Show in May 2015.

"I know what I’m doing. I have it all planned out — plans to take care of you, not abandon you, plans to give you the future you hope for.

When you call on me, when you come and pray to me, I’ll listen.

When you come looking for me, you’ll find me.

Yes, when you get serious about finding me and want it more than anything else, I’ll make sure you won’t be disappointed.” God’s Decree.

“I’ll turn things around for you."