Sola Gratia - What it means.

Question: "Why is sola gratia important?"

Answer: Sola gratia is important because it is one of the distinguishing characteristics or key points that separate the true biblical Gospel from false gospels that cannot save. As one of the five solas that came to define the key issues of the Protestant Reformation, this doctrine is as important today as it was then. The Latin word sola means “alone” or “only,” and the essential Christian doctrines represented by these five Latin phrases accurately summarize the biblical teaching on these crucial subjects:

Each one is vitally important, and they are all closely tied together. Deviation from one will lead to error in another essential doctrine, and the result will almost always be a false gospel which is powerless to save.

Sola gratia is simply acknowledging that the Bible teaches that the totality of our salvation is a gift of grace from God. As it says in Ephesians 2:8-9, “For it is by grace you have been saved, through faith — and this not from yourselves, it is the gift of God - not by works, so that no one can boast.” It is the acknowledgement that salvation from the wrath of God is based on God’s grace and mercy and not on anything good in us. One reason so many want to reject this important doctrine is that they do not want to accept what the Bible clearly teaches about the basic condition of human nature since the fall of Adam. The Bible says that our hearts are “deceitful” and “desperately wicked” (Jeremiah 17:9, NKJV) and that “there is none righteous, no not one; there is none that understands, there is none that seeks after God" (Romans 3:10-11).

Rather than acknowledge our total helplessness and hopelessness apart from the grace of God, most people want to believe that they have a role to play in their salvation. Western culture is so saturated with the idea that we are “masters of our own destiny” and “captains of our souls” that the idea we are without any hope apart from - and based solely on - the grace of God is foreign to our way of thinking. Sadly, it is also foreign to the way the gospel is often presented - as a plea to man to make a “decision for Christ” rather than a command to “repent and believe.” Such a presentation is based on the flawed and unbiblical idea that can be summarized by the saying, “Satan votes against you, God votes for you, and it is up to you to cast the deciding vote.” So much that passes for evangelism training today has more in common with something from a book on salesmanship than it does the Bible, often using manipulative techniques to get someone to “make a decision” that come right out of a salesmanship guide on how to “close the sale.”

The truth of sola gratia or salvation by grace alone is what inspired John Newton to write the wonderful song “Amazing Grace.” It is a grace so amazing that it can save a wretch like me. It is an amazing grace that “God demonstrates His own love for us in this: While we were still sinners, Christ died for us” (Romans 5:8). This doctrine is important, because it correctly communicates the fact that God saves us because of His mercy and goodness and not because of anything that makes us desirable to God or worthy to be saved. We cannot grasp how amazing God’s grace in salvation is until we first grasp how sinful we truly are.

Sola gratia is important because if we reject it, we reject the only Gospel that can save. The alternative to sola gratia is a gospel that depends on the goodness of man instead of the grace of God, which is no gospel at all. Sola gratia is what makes the Gospel “good news.” It helps us to understand that while the Bible says there is “no one who seeks God” (Romans 3:11), the good news is that God seeks after sinners. Jesus said He came to seek and save that which is lost (Luke 19:10), not to wait for the lost to seek Him. It is God who acts first, God who draws the wretched sinner to Himself, God who gives new life to person who is “dead in their trespasses and sins,” God who causes a person to be “born again” so he or she can “see the kingdom of God.”

Those who deny sola gratia, either in words or actions, end up with a gospel that entails God bringing man only so far along the path of salvation and then leaving it up to him to save himself by “making a decision for Christ.” As a result of this “cooperative effort,” man is then saved not by grace alone but by grace plus works. However, this is not the Gospel presented in the Bible because everything man does is tainted by sin, so unless God fully brings it to pass, unregenerate man will never respond in faith to the Gospel.

Finally, sola gratia is important because it is the basis of our assurance of salvation as sinners before a holy God. If we deny sola gratia, then we cannot have any true assurance of our salvation. Since everything we do is tainted by sin, how can we have confidence that our “decision for Christ” was effective, and how can we know if we have enough faith to be saved? Fortunately, the Bible reveals a different Gospel, one based not on what we do but on what Jesus Christ has done.

The “Good News” is that Christ came, lived a perfect life, died on the cross and rose from the dead in order to give new life to dead sinners, to deliver them from their sins and give them eternal life with Him. It is the reason that we can know that Jesus will lose none of all that the Father has given to Him, but raise them up at the last day (John 6:39).

This is what our cruising ministry is based on. 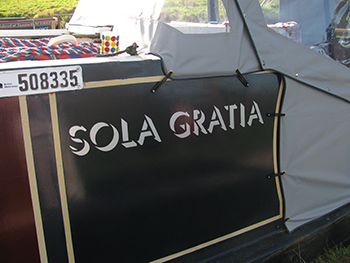 "Sola Gratia"
The name as it appears on "The Good Ship"