About Us - Tracey Clarke.

Tracey (First Mate) was born and dragged up in Shoreham-By-Sea, West Sussex. At the age of 14, she was persuaded (initially reluctantly) to go along to a local church youth club, where she met Tim. Two years later, they were ‘going out together’. Three weeks after Tracey’s 21st birthday, they married at that same church; St Michael and All Angels, Southwick. That was 1 August 1987. Tim still hasn’t proposed to her! On her 19th birthday, he gave her a little box, wrapped just like any birthday present would be. Upon opening the box and seeing the huge grins on her parents’ faces, she somehow knew which finger that ring was for!

In 1988, after a time of health issues, Tracey was told by medics that she would never be able to conceive. This was devastating news. Then in 1992 the first miracle was born: Debbi, a healthy 9lb 2oz baby girl. Debbi then gained a sister, Rosie in 1995: miracle number two!

Tracey gave up her career as a Hospital Pharmacy Technician to raise the girls, returning to the profession 16 years later. During this time, she did a range of other things including childminding, setting up and running a children’s Day Nursery, school exam invigilator & cover supervisor, and Pharmaceutical Regulatory Affairs Officer. Going back to the Hospital Pharmacy Department in 2008 was a huge challenge, as the role of a Technician had changed beyond recognition. Tracey worked hard to rise to the challenge but, in 2011, when professional registration became mandatory, she decided to leave, not wanting to pay registration fees to do a job that she wasn’t really enjoying. She then went on to a job as a receptionist and publicity designer for a local bus company.

In July 2011, Tracey began to suspect that something was not quite right with her eyesight. By the end of that September, after a barrage of medical tests and investigations, she was registered Severely Visually Impaired / Blind. This was due to Optic Nerve Atrophy. Over the course of the next few months, her vision continued to deteriorate to a tiny pinhole window in her right eye. (She had never had functional vision in her left eye, but that had not caused her any problems). It soon became evident that stress and tiredness caused very significant fluctuations in the clarity of her little window.

Work became increasingly difficult and, eventually, Tracey was advised to leave and claim the benefits to which she was entitled. This was not a comfortable idea at all, but Tracey had to surrender to the situation.

Soon after being registered SVI/Blind, Tracey was visited by a specialist social worker who referred her to Guide Dogs UK. Thus began the application process for a furry assistant. Amazingly, she was given the wonderful gift of Oakley, a black Labrador, in October 2012. Life has never been the same since! Without Oakley, we could not have started our cruising ministry.

To read more about the meaning of "Sola Gratia", click here. 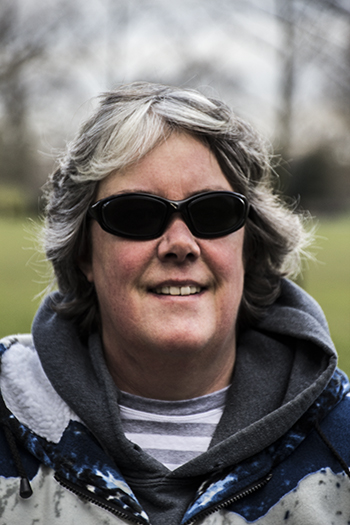